Do you like fantasy, urban or epic? Are you fond of elves, fairies, pixies and kobolds? Do you enjoy stories with magic?

Welcome to our blog hop! Here is a chance to read about such creatures, find out about fantasy stories, and win books and gift cards! Summer is more magical already. 🙂

Click here to reach the central page of the blog hop where you can use the rafflecopter and win the main prize: a selection of all ebooks and print books entered in the event plus a gift certificate!

Some of these authors participated in a group interview to talk about their creatures, their stories and their worlds – it’s loads of fun, so just click here to read it!!!!!!!! 🙂 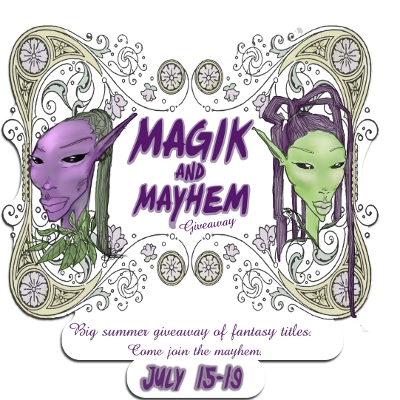 Because if you leave a comment, you will enter my own personal raffle and can win a copy of my boxset (ebook) containing the whole first season of Boreal and John Grey – plus a copy of my short fantasy story Dreamdancer (ebook)!!!

I have always been in love with elves – well, since I was fourteen and read Tolkien. Elves always seemed inextricably linked to epic fantasy – the Lord of the Rings variety. The wise, vegan, tree-hugging type, usually disgusted by humankind’s barbaric ways and wars.

I wanted to see a different kind of elves.

Besides, I had a feeling elves were an underrepresented minority in fantasy.

Urban fantasy tends to focus on vampires and witches and werewolves. Oh, there is UF with elves and fairies, though what I’ve seen is mainly Young Adult, but I wanted elves not only with magic but also technology, elves not wise and bonded to nature but wicked and bent on world domination.

And I also wanted them to be sexy. Legolas is okay, I guess, but let me tell you, my elves are much hotter.

I wanted there to be a reason for their differences from us humans, too, an explanation, a history.

During the 13th century In Iceland, epic poems and tales called Edda were written down. These spoke of many gods and magical creatures, among them the aelfar – the elves. Tall and pale – their name means ‘white’ – these trickster beings brought misfortune and illness, and exchanged healthy children with sickly changelings. They lived in Aelfheim – literally “elf home” – one of the nine worlds hanging on the world tree Ygdrasil.

We also know from the Edda that there were Light Elves living on the surface of their world, and Dark Elves living underground. There is a lot more about these beings, information Tolkien drew upon for his creation of the elves of Middle Earth.

Thus I went back to the source. I read what the Edda said about elves and dwarves and their world, and started again. Decided there would be a Veil, a Grey space, between the worlds, and that sometimes beings could cross. Decided the elves had crossed before, bent on conquering. The Dark Elves managed to stop them, locked the Gates. But the Light elves found a way to cross once more and take over our world.

Enter Ella Benson, Paranormal Bureau agent, who fights all that comes through the Veil – dangerous Shades crossing into our world.

But something has changed: increasingly dangerous creatures are slipping into her city, her work partner has just gone missing, and a mysterious – and, frankly, quite hot — guy saves her life. His name is Finn and, as it turns out, he’s a natural when it comes to fighting the Shades.

With the Gates opening and her partner gone, Ella needs a new ally. Enlisting the mysterious Finn is her first thought and seems to work quite well, until she realizes Finn has some dangerous secrets of his own.

Together with Finn, and the fate of the world on her shoulders, what’s Ella to do but grab her weapons and figure it all out, one way or another.