A story taking place right after the events in Season 1 of Boreal and John Grey. Featuring: Ella, Finn, Mike and Scott – as well as fairies, a cat-woman, a witch and many other disguises… 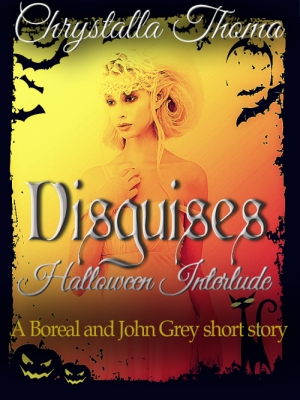 Halloween. Ella lets Mike drag their little group to a costume party for some hard-earned fun. Witches, fairies and elves abound — but what Ella doesn’t expect are ghosts from the past returning to haunt them.

“Here.” Mike thrust what looked like a yarn of white spiderwebs into her hand.
Automatically she took it. “What the hell is this?” She tried to untangle it and it stretched into – a dress? “No way I’m wearing it. Forget it.”
“Of course you are. With this.” Mike handed her another ball of stretchy fabric which was – tights? “And this.” A white belt.
“Do I even want to know why you have a dress and tights in your drawers?” Ella stole a glance at Finn who was still staring at the silver shirt. What the hell was going on?
“Halloween is once a year,” Mike said, pulling out more clothes from his closet. Maybe it opened into a theater vestiary in Narnia or something. “I might’ve dressed up as a woman once or twice.” He buried his head between hanging coats. “I’m told my legs look great in a short skirt…”