I know, I know I have made you wait way too long for this book. What with writing a non-fiction book about dragons, then life going off the rails (deaths in the family, moving house) and getting sidetracked by a fantasy series (Boreal and John Grey), I delayed the writing of Rex Aftermath.

Well, it’s here now!! I do hope you will enjoy Elei’s and his friends’ new adventures…

As a thank you for your patience, I have set the book at a mere 99c for a few days, so hurry up and snap a copy before I raise the price. Thank you for waiting, thank you for asking after my heroes, and thank you for joining in the adventure!!!

There is war on the Seven Islands. Elei and his friends have unlocked the weapons held underground, but the Gultur regime is not so easily put down. Mantis and his ragtag army of kids need all the help they can get. Elei, Kalaes and Alendra return to Artemisia to create a diversion, while Hera, Sacmis and Mantis attack Dakru City, in a final attempt to bring peace. But with a net of betrayal closing around them and Rex set against Regina in a final confrontation, the price might prove too heavy. 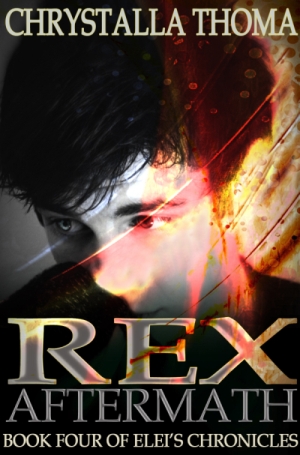 At this point, the book is only available of Amazon, but should go live on Barnes and Noble, Kobo and Itunes within the week.

And a teaser for you….

“Down!” Kalaes shouted and Elei dived to the ground before the echo of the word had faded, trusting Kalaes and Alendra to do the same.

Bullets zipped overhead before the rat-a-tat-tat of machine guns burst through the quiet, pressing into Elei’s eardrums like a drill.

The bullets had barely stopped flying when he was back on his feet and running. Who had betrayed them? Iliathan? Or Dain? He bent, grabbed Alendra’s arm, glanced at Kalaes who was scrambling up, and took off again.

“Follow me,” Kalaes said and veered into an alley.

“Sure?” Alleys were sometimes dead-ends.

Alendra stumbled, dragging Elei down. He steadied her with an arm around her waist and she leaned into him, her body shaking.

“I know my city,” Kalaes grunted and turned, grabbed Alendra’s other arm, and nodded at Elei.

Together they lifted her to her feet and set off running. They ran as if the hounds of the fifth hell were snapping at their heels, down the alley and into a covered passage, then out into an avenue and into another alley, back out and into a broad street with shops, then another alley, and Kalaes slowed until they came to a staggering halt.

Alendra slid to her knees, then all fours, panting, a bright outline with a beating heart.

Elei stayed on his feet although his legs trembled, trying to listen above the rushing in his ears. The alley pulsed with colors. Rex swept it over and over, picking up organic residues in the trash that danced in the rising wind. It had to be cold, but Elei couldn’t feel it, his body vibrating with tension.

No, no sound other that their harsh breathing. Had they shaken off their pursuers? Kalaes unslung his gun and turned in a circle, then gestured at the busy street beyond. “We need to cross into the seaside quarters. The festival of Helios has started. There will be crowds to get lost in.”

Festival. Elei blinked, dazed. Somewhere, somehow, people went on with their lives, ignorant of the rising undercurrents until they were ripped away.

In Elei’s experience, sooner or later everyone was.

Another sound penetrated the fog filling his head, and his heart jolted in his chest. Helices whirring. They had sent helicopters, after all. Rex sent another pang through his heart, heightening his senses until every smell, every sound and color was painfully clear.

Yeah, yeah. Sorry I doubted you.

Elei scanned the alley. No time to cross the street, lose themselves in the crowd. Too late. Yeah, some things never changed.

The buzzing rose to a crescendo, subsonic waves making the windows of the buildings vibrate, his teeth ache.

A round shape set in the street caught his eye, flaring a cold blue in his tainted eye: metal. A sewer lid.

He grabbed Alendra’s hand, hauled her up in one movement, lurched sideways and clasped Kalaes’s arm, spun them around.

“What are you doing?” Kalaes resisted. “We should run.”

“No time.” Elei dragged them to the sewer entrance, let them go and dropped to his knees, working to get the lid off.

After a frustratingly long moment, the other two came to help. They pried the lid off with fingers and nails, until it rose off its rusty frame with a creak.

And not a moment too soon. Something smashed into the wall behind Alendra and she gasped, her face going white.

“Get down there, quickly,” Elei said, rolling the lid off, setting it aside and drawing his Rasmus. “I’ll cover you.”

Alendra didn’t argue, thank all the gods, just turned and grabbed the rail of a moldy ladder, descending into the darkness below.

“You next,” Kalaes barked, reaching for Elei as if to grab and throw him down the vent. Then he jerked as bullet smashed into a wall. A second later, plaster and concrete rained over them. Kalaes hunched over. “Shit.”

“I’m okay.” But his jacket gaped open, allowing a glimpse of bright red blood spreading on his t-shirt.

Hells. Fear left Elei gasping. “Dammit, Kal.” The pulsing colors were blinding, the fresh blood on Kalaes’ shirt flickering like a beacon. More bullets zipped past his ear, and his mind blanked, leaving one thought running in a loop: get Kalaes to safety. “Go, now! I’m right behind you.”

A hesitation, but the expected comeback didn’t come. Kalaes nodded and lowered himself inside the vent, his wide shoulders barely fitting, his silence throwing Elei even more off-balance until his heart boomed fit to break out of his ribcage. Just how badly was Kalaes hurt?

Wind currents ripped around him, tearing his jacket open. His hair whipped Elei’s face as he laid the lid aside and glanced into the sewer, seeing Kalaes’ head vanish in the dimness.

Bullets sprayed, hitting the asphalt and sending the lid skittering away with a screech. Elei snatched at it and missed. Screw it, he’d have to leave the vent uncovered. He turned to the gaping hole, bent to lower his legs inside—

Something slammed into his back, throwing him face down on the asphalted street. He writhed, unable to breathe. Darkness rose in a glittering wave and pulled him under.