As you may have noticed in your perusal of my humble blog, I have now added a new page called “Favorite Books”. There I will be listing… my favorite books, yes, exactly. 😀  And Incoming Alert is one of them.

I honestly loved this book so much. The characters are quirky and funny, but also deep and well crafted, and so very real. The originality of the world Arlene Webb has created is amazing, and the interactions of the characters well realized. I highly recommend this book, and not just to lovers of Young Adult fiction. In fact, the book has some mature themes as well and would appeal to all audiences over 16.

How Not to Celebrate your Century Birthday:
Tell overprotective parents you’ll be fine.
Phase to a parallel dimension to amuse yourself with humans and choose a name.
Arrive flat on your face.
Learn you’re unique among immortals, and not in a good way.Hello, Earth. Boy’s victory dance on top of a cafeteria table
doesn’t last long.
She’s looking at me? Seriously? Jubilation vanishes when he realizes the young woman gawking at his trembling two-inch form–which should be invisible–is as frightened as him.
Major screw up that he is, he ignores everything he’s been told about survival and shifts
larger without first refilling his phase-depleted veins.
Then comes the icing on what’s sure to be his last birthday cake. After denying
he’s crawled out of the meatloaf, he bonds with the mortal. Not only is he
drawn to a first century name that guarantees anger and ridicule, it’s doubtful
he’ll survive this birthday, let alone celebrate another.Incoming Alert is a science-fiction adventure novel for general audience, but
contains violence and adult themes.
No vampires, weres, zombies, fey, or previously known supernaturals were used
or otherwise harmed in the making of this novel.
Purchase link:
Amazon
I have hard word from the author that a sequel is in the works, so keeping my fingers crossed it will be out soon, because I can’t wait to spend more time with these great characters. 🙂
What reviewers on Amazon have said about Incoming Alert:
“This is such a fun book to read. The lead character, Caron, leaps off the page with his exhuberance and innocence. Ms Webb has created a cast of unforgettable characters…”
“A book filled with sparkling humor, funny encounters, fascinating characters, of the human and Ron-kind, it also plumbs the depths of human nature, desire, and despair.”
About the author: 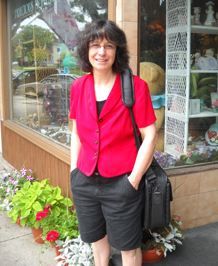 “Sci-fi, paranormal, thriller-mystery, indefinable, I’m an author who adds sweet and spicy layers of romance to any genre.”
Published with MuseItUp Publishing and Decadent Publishing, Arlene has many novels and short stories under her belt. When not writing, she runs family-owned greenhouses and florist shops in New York.
Website
Excerpt from INCOMING ALERT:
Caron swallowed hard. Dad was taking this “grow Up” thing damn seriously, but most of all, he wanted him to forget Lissa, forget Earth, forget becoming man-sized, and come home a failure? I love you Dad, but I just can’t do that. He tossed his braids back and traded fear for his most cheeky grin. “Ahh, father mine whose wisdom I honor, don’t treat me like I’m still in my eighties. If you didn’t coddle me, maybe I would mature.” He allowed his own Lissa-flavored tears to splatter. “Call me Boy for another century if you wish, but trust me not to disappoint you. Give me forty-eight hours to care for this human’s problems. I swear, I think I can do this. But, Dad? Why do I need to get tall? Not sure I want to phase so humongous I need to drink an elephant. Is there a zoo near here?”

Ask him. Spit it out. Very important detail. “Um, all parts of me will grow, right? Not that I plan to…er…do anything, but it’d really suck to be unronned, so to speak.”

Airon slapped his knee. He glanced at Lissa. “His naiveté would make a newborn shudder. You see why I fear for him?”

The heat crept from his face into his neck. Caron examined his toes.

Airon barked, “Look at me.”

Caron snapped his chin up. That dark scowl froze him in place.

“No predator can survive in this dimension if you’re visible for prey to crush under their foot. This isn’t IF where everyron loves you. The monsters here are real.”

He shrugged. Time to either hunt elephant or go to that whatever in the oblivion. He smiled, eyebrows cocked. “After I find a pleasant fiend to slurp, will you do something to get the wings rolling? Don’t tell me De can fly big as a man, too. Hey, Venge was shorter than you. You’re over six foot? I bet I can top that loser.”

Airon jumped to his feet. “This isn’t a game, you insolent fool.”

Furious father alert. Get a phase on!

Airon stomped through glass and started to reach down for Caron.

“Don’t. I can do this. Better stand back so I don’t topple over you, right, Dad?”

Dread, worry and so much love filled those dark eyes above him, he closed his own. He knew he could grow—Up—at least six inches…Oh wait, sweet. He already was six inches.

Stretch. Expand. Enlarge. He watched the pretend ruler behind his eyelids. Molecules wanted to lock at seven inches, but he pushed to eight—ten, a foot.

Like climbing a forbidden blood-drain at home, he forced aching muscles onward. It hurt. Should it hurt? Who cared? I care, keep growing.

Interesting, four feet. Maybe he should stop. His skin had to be ripping, peeling from his flesh, instead of expanding. His bones, all two hundred and six, or eight, or whatever, vibrated. Damn, his balls had to weigh a ton apiece. Didn’t someron boring from Beginner Psych say short males were scorned on Earth? If he found a female here his age, she’d never want to dally with a Napoleon-complexed dude.

Five foot! Enough? But Dad said he’d know. It’d feel like reaching a cliff or something? If he stopped, asked, drained a whale whose balls really did weigh a half ton a piece—snicker, a ton a whale, he’d learned that tidbit in Fun Biology—then tried to phase taller, would Dad strangle him? Yep, no doubt.

Five feet, ten inches and—ohhh, his heart, lungs, internal organs no longer throbbed, they howled. He locked and fastened at five feet, eleven and a half inches.

He snapped his eyes open.

Crap. What good were long legs if they didn’t work?