Today I am participating in the Disturbed Fate Tour by a wonderful author I’ve showcased before: Kia Zi Shiru. I love her work not only because it’s beautifully written, but also because it deals with themes that interest me very much. It’s paranormal and fantasy but with LGBT characters, who, in my opinion, are not represented near often enough in the speculative genre.

Her new book Disturbed Fate (Otherkin #1) has just been released and I can’t wait to read it!!! 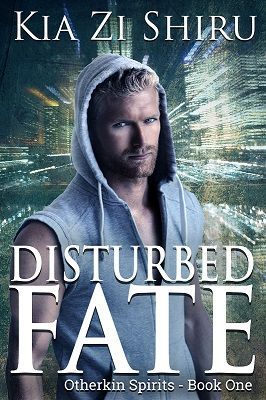 Marc, a small pet shop owner and seer, needs help with his store, but his new employee, Galen, brings with him more trouble than expected. Marc tries to keep their relationship professional even if Galen seems insistent on taking it to the next level. And then there is the problem of Galen’s past.

Keiran, a hard working medical student and Marc’s best friend, has a small problem, a stalker. One night he confronts the guy and finds in his stalker vampire, Devlan, is too alluring to turn down. But Devlan isn’t who he seems to be.

When the four men meet up for a night out their lives fall apart. Marc’s premonitions are wrong and everything points towards one autumn night a couple of years ago. Now they need to figure out what happened that night, before someone dies, again.

Time is running out. The visions might be false, but they don’t paint a pretty picture, not about their futures and, especially, not about their pasts. They need to reverse the change before it is too late.

Where to find it!!

So I asked Kia a few questions about her writing, and she kindly replied to them. Here you go!

Hi dear Kia, welcome. Can you tell us a few words about yourself and your writing?

Hi, I’m Kia, I love reading and writing. My favourite genres are contemporary and fantasy. I like stories that talk about social norms and just over all are interesting, this usually means that I read LGBT books but also other things that don’t take an easy route when it comes to characters or story.

Why Urban fantasy and not epic?

I’m slightly scared of epic stories. Well, that is part of the truth. Epic requires a lot of world building, more than I’ve done for Otherkin Spirits. On the other hand, I’ve had some ideas for possibly writing an epic story, but I don’t think my skills are good enough yet. Plus, there are quite a few stories that I want to finish before I start the epic quest for the epic story.

Can you recommend me any good urban fantasy series?

Hmmm, Boreal and John Grey, have you heard of that one? Okay, kidding kidding. Some that come to mind are Cassandra Palmer by Karen Chance (though I’ve only read the first book, but I loved that) and Bite and Bitten by Sean Michael (gay werewolf story). Also for the more magic loving people, either the Sweep or the Balefire series by Cate Tiernan.

What makes your urban fantasy different?

I don’t just use regular types of creatures. Well, we’ve heard that before the past couple of years, I know. What I mean with it is that mine are based on the Otherkin community, an underground community of people who believe they are non-human. I didn’t fully use their information though, the people in my story are a bit more magical. What I did take from them are things like awakening, how to safely drink blood, the idea of psychic vampires, vampires don’t have super strength and aren’t ageless or anything like that. Otherkin in that world means those who are not the same. Kin (as in kindred spirits) means those who are the same. Vampires are a different kin from werewolves or humans. I chose to title the series Otherkin Spirits since the characters are all of different types.

At the same time I also use things like different worlds, seers and things like that. Things that people will remember as more common ideas of the Urban Fantasy genre.

What is your current project/most recent release ?

My current project is the Otherkin Spirits series. The first book Disturbed Fate about a seer who finds out that the fate he has always seen has been altered and he and 3 others need to figure out how to fix it is out already. The second book, Disturbed Connections about a werewolf and a psychic vampire in love but kept apart because of werewolf clan and vampire coven rules is planned to come out next month.

What is your next planned project?

After these first two books of Otherkin Spirits I’ll be working on a trilogy that hasn’t got a real name yet, for the moment it’s named Sean, after my main character. It’s a more traditional vampire story and has enstranged twins, of who one is a vampire (and my MC’s boyfriend) and the other isn’t a vampire. But I’m not saying any more since I’m still planning some of it and I don’t want to spoil any fun.

Links to your work and yourself??

And if you want to keep up to date you can sign up for my newsletter!

Black, but since black is not a real colour (rather the absence of colour) I’m choosing toxic green

My birth town again since a few months, Groningen.

Moonchild, it’s a Japanese vampire movie with music stars Gackt and Hyde in it.

What’s in your fridge right now?

What book are you reading now?

What is your favorite word at the moment?

Guys, not sure why, an interesting leftover from living in the UK. My latest writing is full of the word guys.

Kia Zi Shiru is a Dutch girl who did her bachelor studying English and Creative Writing in the UK but has now returned to the Netherlands to do her masters. Amongst her interests she finds writing, reading, doing research and learning different languages (including but not limited to: English, Dutch, French, German, HTML, Java, PHP and Assembly). Her writing and reading habits include books with Young Adults, gay themes, strong female or minority characters and fantasy elements (more often than not all at the same time).

Keiran walked on, taking the same route as always. Past the high buildings, past the park. Wait. Keiran stopped. The man was close, closer than before. Keiran turned around. No one. The man was still there somewhere, he could sense him, but he wasn’t visible. Keiran turned to the side, back into the park, into the open. He wanted to see this guy who made his knees go weak and his heart race.

Keiran stood still, his back to where he knew the other man was, slowly taking off his jacket. The cold cooled his skin, fading the blush that had started to form. He felt the power of the energy intensify. The man was coming closer. He became engulfed in the energy, in the pressure of it on his senses.

Warm lips touched his neck from above, soft in contrast with the hard body pressed against him. The whisper was clear in the silent park. “Oh, how intoxicating you are from this close, even more than the first time I found you.”

Keiran stilled and then he felt it, low, pounding—want, need, blood lust. He gasped. Oh, this was nice, this feeling of undiluted craving. A sanguine vampire. He pressed against the body behind him, moving his body, enjoying the sensations. He would be able to fly if he could actually tap into the energy of this guy.

“Stop.” The voice was rough, stern, went to his groin immediately, but it made him still. “I should have guessed, you’re one of them. That is how you knew I was here. Hmm.”

Keiran could not stay still with this guy so close to him: he needed to move, to feel. He needed. They stood still for a couple of minutes before he could no longer hold himself and started to move again. This guy was built like a wall, a smooth wall but definitely a wall, tall, broad, hard. Two rough hands gripped his hips and kept him in place.

“If you don’t stand still I will leave.” The words were spoken so close to his ear that the man’s lips tickled the shell of it. Keiran held his breath, not daring to make any movement at all, apart from the involuntary bulging of his pants. This guy was intense. Not only did he emit power, he knew how to use it, and Keiran hadn’t even seen him yet.

“You know what I am and what I want. Can you deal with that?” The hands on his hips eased their grip, making his hips move back into the guy. “Well?”

Keiran nodded. He was not sure what the man was asking, or offering, he was too caught up in the experience. But he didn’t care, just to be close to this guy was worth a lot.

Keiran complied, cold air hitting his back now it was no longer covered, and he arched forward.