David North-Martino, martial arts instructor and published fiction author, has kindly agreed to talk today about himself and his stories. 🙂

Chrystalla: Hi dear David and welcome to my blog! Why don’t you tell us a few words about yourself first?

Dave: Hi Chrystalla! Thanks for the opportunity.

I’m a Massachusetts-based writer. I live with my wonderfully supportive wife in a small town that borders on the state of Rhode Island.

I worked for a decade in the criminal justice field in the private security industry as a manager and a human resources recruiter. After it was downsized, I went back to get my degree in English and psychology from the University of Massachusetts. Now that I have my degree, I’m making a go at writing full-time.

My first published short story won the 2nd annual $500.00 Déjà vu Horror Fiction Contest at Dark Recesses Press and appeared in their 4th issue. My short fiction has also appeared in Afterburn SF, The Swamp, and most recently, as you know, in the anthology: Extinct Doesn’t Mean Forever. I also have a story slated to appear in Epitaphs, the inaugural anthology of the New England Horror Writers (NEHW) coming up in November.

When I’m not writing I love to study and teach martial arts.

Chrystalla: Martial arts, wow… I bet your fight scenes must be described in wonderful detail! Okay, brace yourself for this question: Why do you write?

Dave: I don’t think I have much of a choice! When I don’t write for an extended period of time I feel like something’s missing in my life. There’s an emptiness that must be filled, writing is the only thing that will do it. When I was a teenager, if I wasn’t writing fiction, I was filling journal pages with reflections, anecdotes, and bad poetry.

When it comes to writing fiction, I think I’m working out my inner demons. It’s like therapy. I feel “lighter” after I write.  I also write stories that I hope will get readers to think, to ponder. But with that said, although I like what I write to have meaning, my main focus is to entertain. There’s no better feeling than finding out a reader enjoyed a story.

Chrystalla: No choice, I love that (it’s so true, as every author knows!) Tell us, who or what inspired you to write fiction?

Dave: Originally, I wanted to be a comic book artist. Back in the 70’s and 80’s the artists were like rock stars and their art leapt off the page and captured my imagination. I wasn’t a great artist and I realized what wanted to do was tell stories. A comic book artist, writer and creator, Jim Starlin, mentioned in an interview that he was planning to write more because he felt it was less time consuming to write stories instead of illustrating them. Those comments clicked with me and I’ve been writing ever since.

Then in 1985, Ray Garton’s book Darklings made me want to try my hand at novels. In the novel, Garton used supernatural monsters as a metaphor for the monsters that dwell within all of us.  That really got me excited. However, it would be many years before I tried my hand at writing polished stories and submitting them to editors or crafting novel length work.

Chrystalla: What genres do you write and why?

Dave: I write horror, science fiction, fantasy, mystery, crime, and thriller, even some mainstream and literary. My writing tends to gravitate toward the darker spectrum and most of it is speculative in some form. I guess I just write what I enjoy. And I have very eclectic tastes.

Dave: My mainstream speculative short story “The Language of Ice” was included in the Extinct Doesn’t Mean Forever anthology put out by Dare to Dream Press and is also available as a short story single. Need I say, Chrystalla Thoma’s excellent story, “The Angle Genome,” is included as well?

I just got word that my horror/crime short story “Malfeasance” was accepted in Epitaphs, the inaugural anthology of the New England Horror Writers. Look for it in November. You can find out more about NEHW here: http://nehwnews.wordpress.com/

Currently, I’m finishing a short novel that’s a paranormal thriller called The Wolves of Vengeance. I plan to have it wherever fine e-books are sold by year’s end.

Chrystalla: What gave you the ideas for those short stories and your novel?

Dave: Let’s start with The Language of Ice:

Back in the late 90’s I read an article in Discover magazine about the women of the Ice Age. I would later combine that information with the theory that we carry ancestral memory in our DNA. I originally wanted to write a novel about a woman affected by her ancestral memory. Her modern life would somehow parallel the life or lives of her female ancestors. I never got beyond the idea stage.

Not long before the anthology announcement, I watched a show on the Discovery channel that presented the theory that the Neanderthal had interbred with early modern humans. They hadn’t gone extinct but were still with us in our DNA. I reasoned that if someone were to remember an ancestral past life, they would get this information through their unconscious mind, through their dreams. I had experimented with lucid dreaming and thought that would be a great vehicle to transport the main character back in time so that they could fully experience the past environment. I decided to make my main character a museum curator who was working closely with a complete female Neanderthal skeleton. And I wanted to give the story a dreamlike feel where the reader could either see the story through a scientific or a metaphysical lens where perhaps she was somehow having visions of a past life.

My idea for Malfeasance was inspired by a radio talk show host who asked the question, and I’m paraphrasing: “If your child was locked in a trunk and had only twenty-four hours worth of oxygen, and the kidnapper was in custody but wouldn’t talk, and the only way to make him talk was to torture him, what would you do?” My editor, Tracy Carbone, said the story reminded her of a Law & Order SVU episode with a devilish twist.

As for my upcoming novel, The Wolves of Vengeance, a student I knew in high school that died of a drug overdose inspired the story. I wondered what would have happened if he could have turned his life around, that became the basis for the character. Then I wondered what would happen if all the bad things the character did in his past had come back to haunt him. In the novel he has to return to his hometown to face down the demons from his past and protect the woman that he loves.

Chrystalla: Thank you for telling us the stories behind your stories! It’s always wonderful to hear what inspires authors and what real facts hide behind their tales. David, I would like to ask you, what’s the hardest part of being a writer, how do you get past it?

Dave: I think it can be very difficult to deal with self-doubt. By the time I’ve finished a piece of fiction I am so thoroughly sick of working on it I tend to think it’s a big pile of crap.  I entirely lose perspective on the work and I just have to kind of go on faith that it’s worth sending out into the world. I find it helpful to review the acceptance letters I’ve received in the past from editors. I also like to look at the nice letters I’ve received from editors, even when they ultimately didn’t accept my work. But really, all you can do is send your work to editors, agents, or send it directly into the world through e-publishing, hope for the best, and learn from your mistakes.

Chrystalla: Here let me say that David is also hosting me today on his blogs:

The Pen and the Sword

David, thank you for being here today and for sharing all this with us! Where can people learn more about you and your writing?

The Pen and the Sword:

I would also welcome anyone interested in my work to send me a friend request on facebook. http://www.facebook.com/dnorthmartino

David’s short story “The Language of Ice” can be found in the Extinct Doesn’t Mean Forever anthology (click on image!): 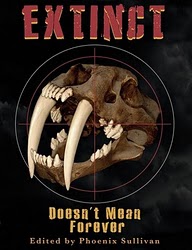 You can also buy his short story separately (click on image!): 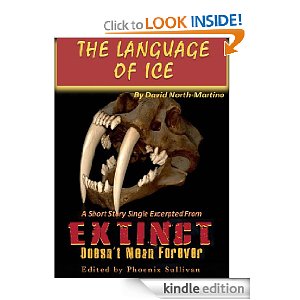