Chrys: Hi, Craig, and welcome to my blog! Why don’t you tell us a few words about yourself first?

Craig: Well, I had my first fiction short story published when I was around age fourteen and I’ve been serious about my writing ever since. I got distracted into journalism and some day-jobs that didn’t quite fit for several years after college, but now I’m back to pouring a lot of my creative energy into writing.

Chrys: What genre(s) do you write and why?

Craig: Right now, I’m concentrating mostly on paranormal suspense aimed at the young adult market. I’m focusing my efforts there because right now I enjoy writing about the high school experience. As for paranormal, I recognize it’s a hot genre right now and I’ve read this sort of thing since I was a young kid. I choose to attach suspense to the paranormal label because my main character, Ember, hasn’t found her first love yet at this point in her journey, so the emphasis is more on edge-of-your-seat paranormal thrills and the adventures she goes through. She’ll discover boys eventually, but she’s not there yet, so I can’t honestly call it paranormal romance. Plus, none of the boys she’ll be infatuated with are vampires or anything like it, so again, I wanted a label that reflected the book’s actual content. Therefore, SHADA is YA paranormal suspense.

Chrys: What can you tell us about your writing projects and recent releases? 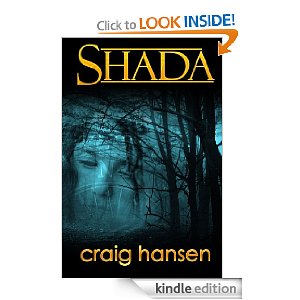 Craig: My first novel, MOST LIKELY, was young adult as well, but focused strictly on coming of age with no paranormal themes, although there were some mild Christian themes. It takes place in Hope, Wisconsin, my fictional setting, and also the same high school that Ember Cole will attend. So characters who appeared in MOST LIKELY could pop up again in SHADA, EMBER and other books I have in the works.

SHADA is my first release, a YA paranormal suspense novella that kicks off the Ember Cole series. It’s a fun adventure, but also a haunting tale of friendship.

EMBER will be my next release, and picks up a few weeks after the events of SHADA.

Chrys: Tell us about your latest release.

“SHADA was an absorbing read about friendship, letting our friends make decisions for us and then having to deal with the fallout. Shada and her three friends—the strong-willed Jeni, the melancholy Ember, and science nerd Willow—are close and Jeni invites them to a sleepover in the woods for a séance. Jeni lives on reservation lands, and when the girls trudge out to the camp site, they soon learn about the history of the place. Shada, like Jeni, is Native American, and understands Jeni when she speaks in Lakota, really putting on a show for her friends. But when a cool breeze starts up and twigs begin snapping in response to questions, the girls have to wonder what is really going on. The story had an endearing charm about it—a combination of the feel of old-fashioned ghost stories combined with the complexities of modern day friendship in a technological age. The girls were not the usual norm, they were unique individuals and I especially enjoyed their camaraderie. Holding a séance on ancient burial grounds was incredibly spooky and Craig Hansen skillfully crafted these chilly scenes. SHADA asks the question of what happens when fake becomes true.” (Excerpted from a ReaderGirls.com review)

Craig: Several things. I had some parallel real-life experiences, including a grandmother who lived across the street from us, had a boyfriend we called grandpa, and who suffered from Alzheimer’s and dementia. I also took part in a makeshift séance once as a kid when I was too young to know what I was doing. There were some other parallels, but I won’t share any that are spoilers here.

So, yes, I drew on a lot of life experience, and juiced it up just a little, made it their experience instead of my own. So the story came together well, I think. I needed a shorter book I could introduce the Ember Cole series with, and this story turned out to be a shorter, less complex plot than EMBER, while still being a complete story. So I released this one first, rather than releasing EMBER first and then, later on, telling this story as a “prequel” or something.

Craig: I have a special place in my heart for the Stephen King novella, “The Body,” which became the movie STAND BY ME. It had four iconic young boys and told a wonderful tale about growing up. I wanted to write a story like that, with that kind of heart, that would instead feature a female cast and maybe become, someday, that kind of story for girls.

Craig: Several. If I have to single out one scene, I guess one I can talk about here without critical spoilers is the dinner table scene between Shada Emery and her parents. It has some great family humor, at least one twist I would hope is unexpected, and really helps define our narrator, Shada, a little better.

Craig: To capture the flavor of northwestern Wisconsin, I knew I wanted to include some characters who were Native Americans. I suppose I could have been lazy about it and made them “modern” tribal youngsters completely out of touch with their own culture, but I didn’t want to go that way.

So I researched the Lakota language so that I could allow Jeni, and sometimes Shada, to speak in their own language from time to time, as multi-lingual people sometimes do.

And I didn’t want to be limited to just one or two pet phrases, so I found a couple different sources that were Lakota dictionaries, and did my best to construct some genuine Lakota dialog throughout SHADA. That being said, I’m still nervous about it. Any day now I expect to hear from a reader fluent in Lakota who will take me to task and tell me my characters speak worse Lakota than a five-year-old. But, I’ve done everything I can to avoid that.

Once I decided to include Sacagawega, I also had to do some research on the Shoshoni language. I did this because one of the things that always seems to be a bit fake about novels with séances in them is that all the ghosts called forward speak perfect modern English… maybe with an accent. It seems to me people who died long ago would speak the same languages they knew in life, more or less. So I researched some Shoshoni phrases as well.

Craig: My author’s blog is a good place to start. It’s located at Craig-Hansen.com. I also hang out at Kindeboards, Facebook and on Twitter. And my books can be found on Amazon, Barnes and Noble, Smashwords, and in the iBookstore (through Smashwords distribution). Basically, “wherever fine ebook are sold,” as they say.

Thank you for this chance to chat!