Today I have a special guest. Phoenix Sullivan, fabulous author of science fiction and historical fiction (Sector C, Spoil Of War), animal lover and vet, wonderful person and fantastic editor of the anthology “Extinct Doesn’t Mean Forever” (not necessarily in that order but surely all of those!). 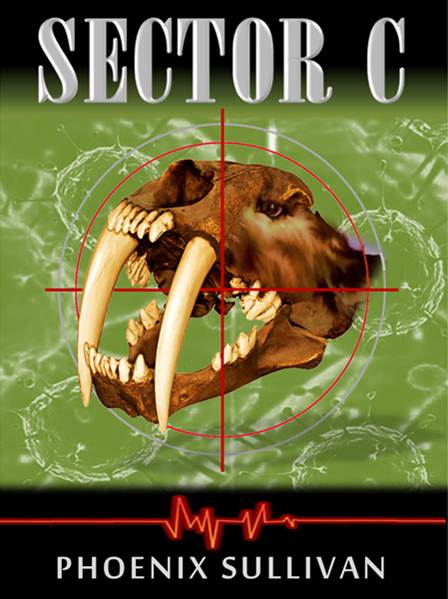 Hi dear Phoenix, and welcome to my blog! Why don’t you tell us a few words about yourself first?

A pleasure to be here, Chrys! Thank you for having me over.

I’m a (young!) retiree living on a small farm in North Texas I call Rainbow’s End. In the corporate world of high-tech computers and networking, I was a writer and editor for 23 very looooong years. Before that, I was a registered veterinary technician. As you might guess, the two constants in my life have been writing and animals.

Tell us about your latest release.

SECTOR C starts out as a medical mystery then steps its toe into thriller territory in the second half of the book. To talk about the book, I have to spoil a bit of the mystery, so if you don’t like to know any secrets ahead of time, feel free skip on down to where you can buy it :o). The descriptions on the e-tailer sites are deliberately vague and non-spoilery.

So for the rest of you who don’t mind some spoilage, here’s the REAL blurb for the story:

Cloning Ice Age mammoths and saber-tooth cats for canned hunts seems like a good business venture – until it reintroduces the species-jumping pandemic that wiped out the megabeasts 10,000 years ago. Now history is about to repeat itself, with humans the next target for extinction.

Triple E Enterprises offers wealthy clients a chance to hunt endangered and exotic wildlife on the plains of North Dakota. For the really wealthy, there’s the elite package in Sector C: exclusive specimens from the Pleistocene. The company is preparing to go public – until people and livestock in the area start dying at an alarming rate.

Investigator with the Centers for Disease Control (CDC) Mike Shafer teams with veterinarian Donna Bailey to find out why. Their search for Patient Zero leads to the Triple E compound where the company is holding a high-dollar megahunt to get rid of the last of its infected stock. Problem is, the hunt is also exposing clients to the fatal disease. Even more troubling, the company is about to capitalize on the prion-based pandemic it unleashed by selling a possible cure to a Sino-Pakistani pharmaceutical that doesn’t have U.S. interests at heart.

Three things stand in Mike and Donna’s way of getting the potentially life-saving research to the CDC before it goes offshore: Triple E’s hostile attempts to stop them, a raging wildfire set by arsonists, and a group of panicked megabeasts inadvertently released from Sector C.

But even if they do succeed, it may already be too late.

What gave you the idea for this book?

The idea for SECTOR C was implanted a few years ago during a conversation with my brother and sister-in-law about whether using in vitro fertilization and surrogate mothers to repopulate endangered animals was a good idea or not. Was there a way to make money with the technology without exploiting the animals? After that marinated for a while and designer animals such as lygers and tigrons starting popping up more frequently, I began wondering about theories for rewilding extinct animals. The mammoth genome has been mapped, genetic material taken from mice frozen for 12 years has been successfully cloned, and Japanese researchers now say an embryo cloned from frozen mammoth DNA is no more than five years away. Exciting stuff! But cool ideas need a plot wrapped around them.

Thinking about why mammoths and other Ice Age beasties became extinct in the first place, I latched onto the idea of disease, which hasn’t been ruled out as a possible cause. But most diseases are either caused by external factors, like viruses and bacteria, or are host-specific, like cancer and diabetes – things that aren’t transmissible. I needed something that’s not only a genetic disease, but one which is transmissible across species and capable of causing a pandemic.

Luckily (well, luckily for the story anyway!), I found a candidate.

Then I needed a way for a private enterprise to make money off the animals it produced. I figured out a good – if controversial – way for that to happen too.

What is special about this book – what sets it apart?

At first blush, SECTOR C is a pandemic story, much like the ones Robin Cook, Michael Crichton and Daniel Kalla tell. Much like the one the new movie in the States, Contagion, tells. SECTOR C, though, has three unique-ish elements:

You might recognize the cover art on the book :o). Some of the same themes resonate between SECTOR C and the Extinct Doesn’t Mean Forever anthology, which I edited (and which contains a wonderful story by Chrys: “The Angel Genome”). I wanted a way to honor the connection between the works.

Do you have a favorite scene in the book?

I’m not sure “favorite” is quite the word for it, but I have a scene where someone’s pet dies in a way that I cried writing. Actually, I cried over two animal death scenes, but one was particularly heartbreaking for me because, tragically, it happens due to the pet owner’s misguided attempt to protect the rest of the family. Trying to write that in a way that was balanced and would give readers pause in wondering how they would react in the same situation was tough.

Still, that’s one of the main goals I had for this book: To present hard choices and controversial ideas and ethical standards in as balanced an approach as possible. I have some clear biases where animals and science are concerned, but I worked hard to ensure they don’t come through as agenda-izing.

What kind of research did you do for this story?

I relied heavily on satellite images of the area in North Dakota where most of the action takes place as well as pictures of ranchland for sale in the area. I researched the native flora and fauna. I have a short scene where one of my MCs doesn’t want to hike through some tall grass because of chiggers. One of my beta readers asked if North Dakota even has chiggers and I was proud that I could immediately point to the research that shows it does. I confess I have never actually been to North Dakota but I pored over maps and images and data to be sure I got it as right as possible.

While documenting all the bits and pieces about size of dairy herds in the Great Plains, methods the CDC uses to collect patient data, and all the other pesky topics that I didn’t know off the top of my head was time-intensive, researching the mechanics of the disease was the most brain-intensive. After all, I was positing something that doesn’t exist today but that could plausibly have existed 10,000 years ago, be cloned in a collateral damage kind of way, and be transmitted across almost any species. I was determined to get the science right. And getting the science right also meant no easy answers and no vaccine-in-the-nick-of-time ending.

Luckily, I have a head for biology and physiology so making the connections and understanding the lingo wasn’t as difficult as it could have been. Some of that research winds up on the page because, well, the first half of the book is a medical mystery. There are enough details, I hope, to satisfy the geeks and not so many that non-geek eyes glaze over. It’s always a delicate balance — one that even veteran medical thriller authors struggle with to varying degrees of success.

What is the hardest part about being a writer? How do you get past it?

Promoting, hands down. And I haven’t gotten past it yet :o)

Where can people learn more about you and your writing?

Confessions of an Animal Junkie: Heartwarming stories about running a farm, being a vet tech and learning to engage with the animals around us. Come share YOUR stories and pictures too.

Dare To Dream / Be Thrilled: Writing- and publishing-related topics; over 100 queries and synopses critted in the archives.