Today my guests are authors Eric Zawadzki and Matthew Schick. They agreed to hop over today and talk about themselves, their writing and their YA epic fantasy novel “Kingmaker”. 🙂

Chrystalla: Hi Eric and Matthew, and welcome to my blog! Why don’t you tell us a few words about yourselves first?

Eric: Matt and I have be

en writing together since we were 14, which is 20 years as of last month. We’ve come a long, long way since our early efforts (as we detail pretty thoroughly in our blog). I’m an extroverted geek – what I’ve sometimes heard called a humanities geek, meaning I like science well enough, but what really gets me excited are people and relationships and the exploration of our shared humanity through the arts.

, forever and a day working together. It’s been exciting. I’m a journalist first, and he’s an English major first, and so if you see an adverb, it’s probably not mine.

Chrystalla: It sounds like you have the perfect blend of knowledge and enthusiasm to create fantastic books! What genre(s) do you write and why? Why YA?

Eric: We write high fantasy – that is, fantasy that takes place in a world different from our own. Everyone always thinks of Tolkien and many dismiss it as nothing but elves, dwarves, and Dark Gods, but this really doesn’t do the genre justice. Really good high fantasy is limited only by the imaginations of the authors writing it, because it gives us a chance to explore an entire world through a different lens.

Our central assumption is that each book we write should reflect the fantasy culture about which it is written, almost as if it was written by an author living in that world. By the time we got just a little way into the second draft of Kingmaker, we knew we had a YA fantasy novel on our hands. This had less to do with the teenage protagonist (which is nothing new even in fantasy aimed at adults) and more to do with what the magic so central to the story implied about the relationship between generations (more on that in a bit).

Eric: We released Kingmaker at the end of September. We’ll be releasing Lesson of the Fire in the spring, which is aimed at an older audience and concerns the rise to power of a possibly mad wizard-king. That one is ready to go (you can read the opening chapters of it at the back of any Kingmaker ebook), but we decided early on to space out our releases at least 6 months. I’m currently actively working on our release for next fall, and Matt will be starting work on the Kingmaker sequel for release probably in late 2013.

So yeah, we have a very busy production schedule, which suits both of us just fine. We’d be lying if we said we have 20 years of manuscripts to polish and publish, because 95% of it really isn’t of publishable quality. However, we definitely have 20 years worth of ideas and story seeds at our disposal. The world has been rolling around like a snowball in a huge field of wet, sticky snow. We’ll likely never even get through all of our best ideas, but we’re willing to give it the old college try!

Matt: I’ve got a huge bin of first drafts and revisions. I’m looking forward to getting going on the Kingmaker sequel, if only because there’s so much cut material from this book I can work with. But the new story will be, well, new. One thing brilliant about the upcoming stuff is that it’ll be less “20 years of polishing/rewriting/discarding” and more “12 months of frenzied activity.”

Chrystalla: Tell us about your latest release. 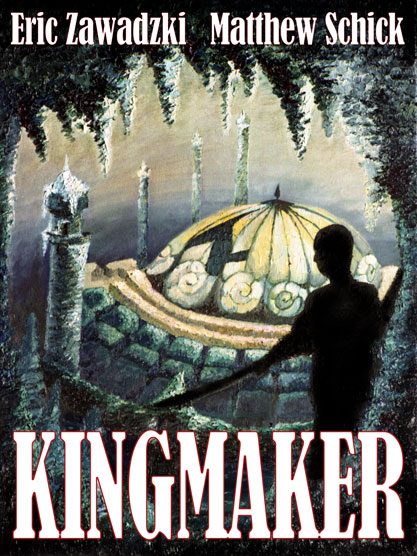 Eric & Matt: In the desert land of Turuna, every child possesses powerful magic, and only an ancient treaty prevents the clans from recruiting them as soldiers. In the tiny Ahjea clan, Butu has just had the worst day of his life. His childhood sweetheart has caught the eye of the most powerful man in Turuna. Even worse, his magic has suddenly become unreliable. Now the adults are telling him he has to stop playing with his friends and start working for the clan.

Despite his youth and small size, Butu receives and invitation to join the clan’s army, which must be more exciting than farming or mining. Excitement turns to frustration and then suspicion when Butu’s squad of young recruits is sent on a mission they can’t complete without magic. Rumor has it that a rival clan has discovered the location of Pisor, a long-lost artifact that restores childlike magic to an adult, and the true purpose of Butus mission is to find Pisor before anyone else does and bring it back to the Ahjea. By the time Butu and his squad reach Pisor, though, they won’t have any magic left to make good their escape.

Chrystalla: What gave you the idea for this book?

Eric: This one was all Matt. I just took the core premise and amplified it.

Matt: The goal was something different. We have this great, detailed magical structure to work with, and we had a child. And in most fantasy fiction, right around Butu’s age is when he’d start learning magic. The idea here is, what if that’s when he loses it?  I wrote a draft with that in mind, and Eric developed it much further. What does it mean for kids to have magic? How does the culture deal with that, and the eventual loss of magic?

Butu’s always been an orphan, too. Family’s always been a big part of the story, in each and every revision. Being accepted when you’re an outsider. In Kingmaker, we put Butu in a place where he’s not the only outsider. He’s with seven other people, who all have their own stories about how they’re outsiders. And they get to grow up a little bit together.

Chrystalla: What is special about this book – what sets it apart?

Eric: Anyone familiar with the genre knows the story. Young, ordinary hero goes on adventure and learns to wield powerful magic in order to complete the seemingly impossible quest. Kingmaker deliberately sets that trope on its ear. At the beginning of the book, Butu and most of his squad have all the magic they could want, and it can solve most of their problems. As the story goes on, though, that magic grows less reliable, and they have to figure out how to make do without it. The elements of the Hero’s Journey and the impossible fantasy quest are still there, but rather than learning to use magic in order to overcome obstacles, Butu must learn to solve problems without relying on magic.

Matt:  Oops, think I answered some of this one above.

Chrystalla: lol! It’s fun, I’ve never interviewed two people at the same time. Okay now, do you have a favorite scene in the book?

Eric: I’m pretty proud of a scene near the end of the book involving tiny, burrowing snakes and people buried up to their necks in sand. It’s one of those where I managed to creep myself out while writing it, and more than one reader has told me they would probably have nightmares about it.

Matt: My favorite scenes are at the beginning, when Butu’s first learning his magic isn’t trustworthy anymore. Imagine that you’ve never taken a scratch before, never scraped your knee, for the first 14 years of your life. And then it happens. It’s more surprising than painful, that’s for sure.

Chrystalla: What kind of research did you do for this story?

Eric: Even though we write not-of-this-world fantasy, I spend way too much time reading articles that might be vaguely relevant to whatever book I’m working on. For example, I read several articles about sandstorms. One article about simoom (whose name means “poison wind”) claimed that some people caught in its path would be so completely dehydrated and covered in dust by it that their bodies would look like half-buried statues. What’s more, if you touched one of these dust statues, it would just crumble away. That last bit was probably a bit of 19th Century exaggeration, but it was such a vivid image and so much in keeping with the feel of Kingmaker that I absolutely had to steal it.

Matt: I spent two spring breaks in Tucson, Ariz., hiking and horseback riding through a region most closely where Jasper is. The rest, forays into articles via the Internet. We didn’t want Turuna to be too much of a mirror of some Earthly culture, but we made sure people acted appropriately for the setting.

Chrystalla: Where can people learn more about you and your writing?

Where to find Kingmaker:

Chrystalla: Thank you so much for stopping over. Your book sounds fascinating and I can’t wait to read it. I wish you lots of success in your endeavors!