Chrys: Hi and welcome to my blog! Why don’t you tell us a few words about yourself first?

Katherine: A few words about myself? Does the fact I was sorely tempted to quote Dumbledore just now tell you anything? I’m a Kiwi girl, currently living in England. I love chocolate, playing ice hockey, snakes and kittens but I hate sand sticking to my skin, asparagus and spiders.

Chrys: HP fans, woohoo! 😀 What genre(s) do you write and why?

Katherine: I primarily write young adult books, but the genres vary widely. At the moment I have a sci-fi, fantasy, paranormal romance and a historical romance in the works. I guess it’s probably influenced by what I’ve read in the past and various interests of my own. I prefer young adult because I quite like writin gin the first person, and I find the stories flow a lot faster too.

Chrys: Tell us about your latest release!

Katherine: My latest release is also my first. It is called The Sphinx Project and is the first in The Chimaera Chronicles. The story features a genetically modified girl called Michaela and her friends as they escape the labs in which they were created. It’s got a lot of action and is quite fast moving. 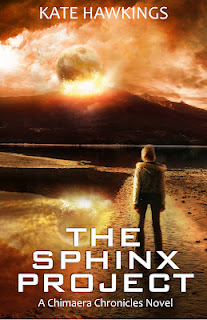 Not many people can say their entire existence has been one big lab experiment: poked and prodded by scientists, genetically modified to be the best and endure the worst, subjected to daily tests and trials that would kill a normal human. All Michaela wants is her own life, to be able to go to school, flirt with boys, maybe eat ice cream now and then. So when the chance to escape finally comes, Michaela and her sister grab it, taking their friends with them.

But they weren’t the only ones to find their way out of those labs. Following close behind are another breed of creature, one that doesn’t know the difference between right and wrong, who exist only to feed their own hunger. The appearance of a strange boy who seems too much like them to be a coincidence makes things even more confusing. But as the world begins to literally fall apart around them, Michaela must accept his help, especially when she could lose the very thing she holds dearest: her sister.

Chrys: If you weren’t a writer, what would you be?

Katherine: I like to think I’d be an actress, but the whole stage-fright thing would probably stop that idea in it’s tracks. There are so many things I’d like to do with myself, I don’t know which one I would pick. At university I studied sport science and nutrition, so I could have followed that path, but I’m also tempted by film-making, marketing and event management.

Katherine: I’ve always been interested in people with special abilities, and a while back I read several articles British legislation regarding the creation and disposal of hybrid creatures. It clicked really well with a scene I’d written and it ended up evolving into The Sphinx Project,

Katherine: I would have to say my favourite scene is when Michaela first meets Matt, but if I told you any more I’d ruin it for you.

Katherine: Like I said there was the newspapers, but most of the research was actually scoping out specific locations. The story is set in America, and although I’ve visited one of the locations from the book before the others were a complete mystery to me.

Katherine: My blog is probably the best place: http://katherinehawkings.blogspot.com/