Chrys: Hi dear Jeff and welcome to my blog! Why don’t you tell us a few words about yourself first?

Jeff: Sure, my name is J.W. Holmes. I’m a U.S. Army veteran, writer and broadcaster of about 20 years (much of it in journalism as well). I’m also the former CEO and chairman of a FOX News Radio affiliate and former executive producer, writer, and host for Top Dog Productions, LLC which also worked with ESPN Local here in the Big Ten market.

Chrys: That’s an impressive resume! For now let’s focus on your writerly side. 🙂 What genre(s) do you write and why?

Jeff: I mostly write in sci-fi and mystery, but recently have published in Christian fiction. I like the freedom a writer has to go anywhere and do just about anything with their characters that sci-fi allows. In mystery I also like the imagination one has to come up with incredible ideas and story-lines. Things that can really get the readers thinking or catch them off guard. I like being able to keep readers on their toes, I guess. lol

Chrys: I like that you dabble in different genres. 🙂 I agree that a writer should feel free to try any type of story they want. Talking of stories, what can you tell us about your writing projects and recent releases? 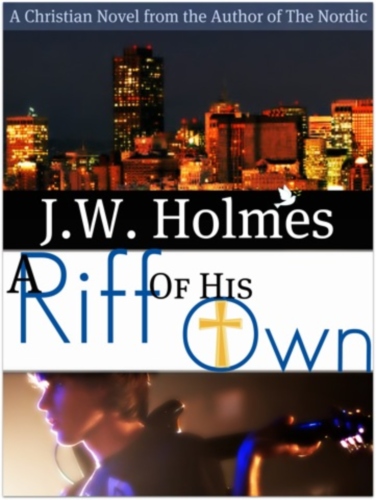 Jeff: Well, I’ve just released “A Riff of His Own” which is getting very good response. I’ve been running a number of promotions on it. I will be doing an audio version of it later this month for mp3 and the like. Here in a week or two will be releasing my initial book in the sci-fi series “The Nordic” which has also been decided to go into a comic-book format later this spring with the book series also continuing. In February, the first of the “Holy Moon” werewolf Trilogy will be released, waiting on mostly artwork there, and then in the spring will be the release of the of the first installment of the Paul Hawkinson mystery series. Right now, my main focuses are are simply on the Hawkinson mysteries, “The Nordic”, and “Holy Moon”.

Chrys: Not only you write all these genres, you publish them too. Well done! Could you tell us more about your latest release?

Jeff: My latest release is Christian fiction, called “A Riff of His Own”. It’s about a young man branching out into the world but who has taken up with a very questionable group of underground types in the music scene and really gets more lost than he could have ever dreamed. So much so, the only back to anything remotely close to the life he knew before is through God. The real problem is, Billy, the main character, is so confused and unsure of himself at this later point, he doesn’t even know to ask God for help, so God comes to him through another person and the story goes on from there.

Chrys: If you weren’t a writer, what would you be?

Jeff: Hmm. Good question. Probably an astronomer or a marine biologist. I like the ocean, but I also am fascinated by the universe. I remember the first time I tried to get my head around just how big the universe actually was and just about had sparks coming out of my ears trying to compute it! lol It’s just limitless and for the ocean and the life living there, I think it’s so odd here it is 2012 and we virtually have explored something like only 5% of it. That to me just hardly makes sense in this day and age.

Chrys: What person or person(s) has/have helped you the most in your career?

Jeff: I would have to say indie author Penelope Fletcher has been an incredible influence on me, so has J.A. Konrath. Miss Fletcher was the first though to really reach out to me and help me truly get my nose in the self-publishing business and to take a good hard look at it really works. Self-publishing is way more of a business than many indie authors I think want to admit and Miss Fletcher really opened my eyes to that fact.

Chrys: What gave you the idea for your most recent book?

Jeff: “A Riff of His Own” had been in development for quite sometime actually. We always see films or books written about the terrible New York or L.A. scene but never much having to do the music scenes around Chicago or the mid-west, and that’s very much what “Riff” is about, only I remember seeing back in college up at Purdue when we had live music back in the ’90’s how these music acts really kind of lived in their own world and they chose to seal themselves up in this underground society most wouldn’t understand. I just remember one night thinking, ‘I should write about this’. So, I did.

Jeff: I think the main things that set “A Riff of His Own” apart from many other Christian fiction books is I wasn’t afraid to tell it how it really is. I’ve read enough Christian fiction, and maybe it was just the books I was reading, but I always saw how the author(s) were being careful not to offend or could have gone further. The problem is, you can’t get to the wonderful truth is you’re not going to face the terrible one. That meaning, things in real life do get quite awful sometimes and sometimes those people involved need incredible help and it can be ugly how bad off some get from very poor decisions. I kept the book very real for that point. The other thing that sets “Riff” apart is the fact it is based on several true story-lines that happen to these people in these underground groups all the time, so as you read and you’re thinking, ‘Something like this would never happen, nobody could be manipulative or lost…’, well, I can tell you, yes, they can. The key element in “Riff” is desperation and how differently some respond to that desperation. It can get quite ugly before family, or a good friend, or God Himself decides to intervene. Things have to play out.

Jeff: My favorite scene without a doubt is where, Billy, ponders on his life and is unable to explain to himself how he got there and what he’s still doing there, in such a rough and confusing place and why he doesn’t just leave. He reminds himself of his dream of making it and just gets sucked back into it all over again, begrudgingly, but he still goes back confusing his bad decisions for strength.

Jeff: Most of my research was done while spending time up on campus around Purdue University spending time with local acts and taking trips up to Chicago and interviewing some of the musicians up there and getting to know their climb to the stage. It really was shocking what some people will do to make their dreams come true and many stories I just couldn’t put in the book because of respect to the reader, I had remind myself this was a Christian fiction. lol

Chrys: Nice! 🙂 Jeff, where can people learn more about you and your writing?

Jeff: They can simply Google me for my official site as “J.W. Holmes”, find my blog at  http://jwholmes.wordpress.com/ , on Facebook under “J.W. Holmes” as well as Goodreads, and on Twitter as @JWHolmes1.

My latest novel “A Riff of His Own” is found on Kindle.