Today I have the pleasure to have as my guest author J.A. Beard who has just released his YA paranormal novel THE EMERALD CITY, while he’s soon to release a regency paranormal romance and a fantasy novel.

Chrys: Hi J.A. and welcome to my blog! Why don’t you tell us a few words about yourself first?

J.A.: Hello, I’m J.A. Beard. I like to describe myself as a restless soul married to an equally restless soul. My two children are too young yet to discuss whether or not they are restless souls, but I’m betting on it. I like to call myself the Pie Master, yet I’m too cowardly to prove my skills in an actual baking competition. So, really, I’m merely a Potential Pie Master.

Chrys: Pies are heavenly, so I hope you get to baking soon and send me one (albeit a virtual one)! As for writing, I see you already have passed the “potential” stage and are now a published author. What genre(s) do you write and why? 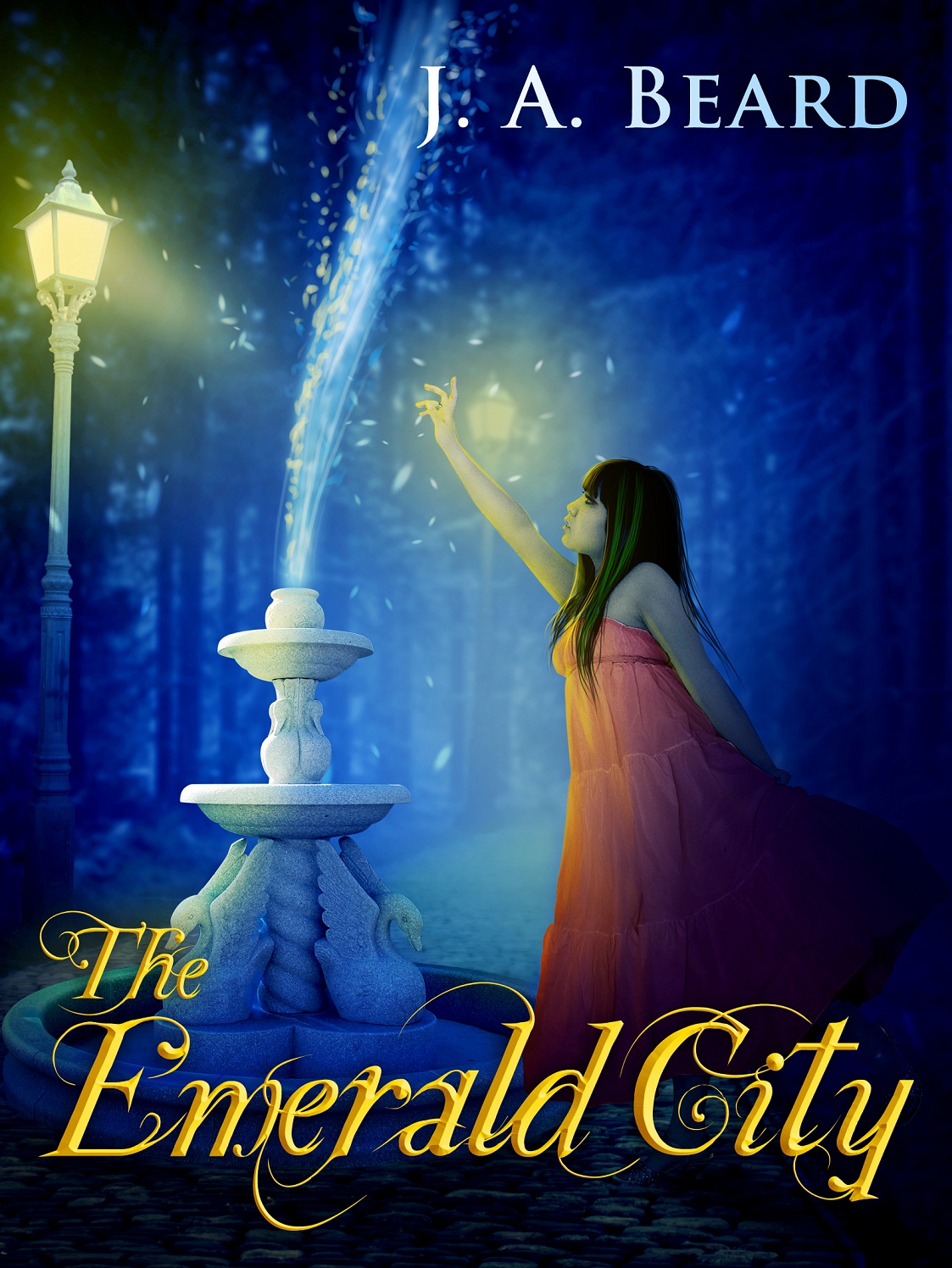 .A.: I actually like to dabble in many genres, but my manuscript focus in recent years has been on fantasy, paranormal, historical fiction, and combinations of those.

Fantasy and paranormal works appeal to me because, outside the writing context, I’m a very skeptical sort. I don’t believe in magic, psychic powers, or anything like that. I sometimes joke that the only magic I believe in is the magic of compound interest (I forget where I first heard that joke). It’s terrific fun for me to imagine worlds where those sorts of abilities exist and influence people—a nice bit of escapism.

That being said, the addition of supernatural abilities and aspects to a story allows a sort of philosophical and sociological exploration as well. You get to start asking questions about how people would react if they had certain abilities or how a society would be different, for example, if a medieval government had professional telepaths. What impact would the mass creation of magical automatons have on a rural slave-owning society? Would a modern American high school student abuse special powers? Why or why not?

The interesting thing is that when you start asking these questions, the answers can suggest a lot about human nature (or at least a particular perception of it). So fantasy and paranormal works, while being fun on a purely escapist level, also help me explore my thoughts on human nature.

Chrys: I’ve always wished for a time travelling bubble (although personally I wouldn’t like to step out of my bubble, just observe…) What can you tell us about your writing projects and recent releases?

With the aid of my editor, I’m finishing up edits on two other projects scheduled for release in February and March respectively, A WOMAN OF PROPER ACCOMPLISHMENTS and MIND CRAFTER.

A WOMAN OF PROPER ACCOMPLISHMENTS is a slightly alt-history (sorry Americans, we lost the Revolution in this timeline) sweet Regency paranormal romance.

MIND CRAFTER is a fantasy story focused around a young telepath who gets drawn into a dangerous conspiracy involving a religious cult.

I’m “cheating” a bit in that I have several novels I’m releasing this year, but most of those manuscripts were completed previously and were just in need of some editing.

Chrys: They sound like very exciting projects. Tell us about your latest release?

J.A.: THE EMERALD CITY is a loose modern YA urban fantasy re-imagining of the Wizard of Oz. Kansas teen Gail Dorjee has tried to escape from the pain of her parents’ death by retreating into a hard shell of anger and sarcasm. When her aunt and uncle ship her off to an elite Seattle boarding school, Osland Academy, she spends her first day making enemies, including the school’s most powerful clique, the Winged, and their leader, the ruthless Diana.

Social war and the school’s uptight teachers are only mild annoyances. Mysterious phone outages, bizarre behavioral blocks, and strange incidents suggest Osland is focused on something much more sinister than education.

Now Gail has to survive at the school with a pretty pathetic assortment of potential allies: her airhead roommate, Lydia, and, Leandra, a cowardly victim of the Winged. There’s also the small matter of the handsome but cold Nick, a boy who seems interested in Gail. He just happens also to be Diana’s boyfriend.

Chrys: Echoes of Oz. Interesting! Anything else you drew inspiration from for this book?

J.A.: I like musicals. A couple years back, the Broadway touring production of Wicked rolled into town. Now, for those unfamiliar with it, it’s an adaptation of a book by Gregory Maguire. His story is a revisionist retelling of the WONDERFUL WIZARD OF OZ from the point of view of the Wicked Witch of the West. Although it adds some details and changes character perceptions, it’s still firmly set in L. Frank Baum’s Oz.

After watching Wicked, I became inspired. I wanted to write some sort of Oz story, but writing something directly set in Oz didn’t really appeal to me. I’d been on a reading streak of YA paranormal/urban fantasies at the time, so the idea of adapting Oz to a more modern YA setting seemed like a good plan. After all, Dorothy wasn’t an adult when she traveled to Oz.

I’m originally from the Pacific Northwest, so I immediately thought of setting the story in Seattle, which has had the nickname “The Emerald City” for a while now.

Given that my immediate inspiration for this story was a musical, some of that also made it in. Obviously, I don’t have a sound track or anything, but a character with a beautiful singing voice plays a key role in the plot.

Chrys: There are many versions of The Wizard of Oz and lots of YA fantasy around. What is special about this book – what sets it apart?

J.A.: Well, it does seem like there’s a dearth of English-language YA urban fantasy/paranormal books out there focused on Asian-American protagonists. The main character in the story, Gail Dorjee, is a second generation Tibetan-American. Although she’s rather thoroughly Americanized in terms of culture, that ethnic identity allowed me to play around a bit with some Buddhist thoughts as Gail confronts her various trials and travails.

I thought it was an interesting way to build the character and her psychology. It’s also fun because Gail’s like any other American teen, there’s a tension in the way she was raised and the way she wants to behave. Ironically, Gail wasn’t originally going to even have that sort of ethnic background.

I’d read about a controversy concerning a cover update for Cindy Pon’s Asian historical fantasy novel, THE SILVER PHOENIX. I won’t rehash the controversy in detail here, but the summary version is that a newer cover seemed designed to strip out some of the ethnic elements of a story that was actually set in an explicitly Asian setting. There was some suggestion that this was to appeal to book buyers (at the wholesale level, not the individual reader level) who may be leery of a book with an Asian protagonist. The newer cover, unfortunately, also has the added problem of being boring.

I thought that was a shame if true, and it started me thinking about YA books and diversity. I’m African-American, and to the best of my knowledge there are zero Asians or Asian-Americans of any sort in my family tree. So it’s not like I have a particular personal ethnic axe to grind.

The original WONDERFUL WIZARD OF OZ was a quintessentially American tale. Mr. Baum wanted to make an “American” fairy tale. I thought a lot about how America is different in the 21st-century than it was in Mr. Baum’s day. We’re obviously a lot more ethnically diverse and even religiously diverse. I thought it’d be fun to have a character that American teens could identify with as someone who still very obviously a product of American society, but still highlighted that modern diversity in a hopefully non-stereotypical way.

In the end, I’m rather glad I did it. In the end, building the character the way I did really ended up enhancing the story in a way I wouldn’t have predicted.

Chrys: It sounds wonderful. Do you have a favorite scene in the book?

J.A.: That’s hard to say. There are many scenes I love.

There are some great scenes near the end of the book where Gail’s forced to confront head-on her grief over her parents in a way I hope comes across as powerful yet vulnerable. In the end, this is a story about a teen girl already dealing with something horrible, the death of her parents, and being further pounded into the ground by both standard-issue high school garbage and spooky supernatural happenings. She’s a strong-willed girl, but I tried hard to make sure her emotional wounds weren’t brushed aside just by the needs of the plot. I wanted a likable pro-active girl who still, like many people, young or old, has emotional wounds she has to deal with.

In contrast, my other favorite scenes involve Gail’s roommate, Lydia. She’s the Scarecrow analog. The other students call her “Brainless” and she’s a notorious airhead. At the same time, she can always put a positive spin on things and has some great one-liners.

J.A.: Not much really, particularly compared to my fantasy and certainly compared to my historical fiction WIPs. I had to research Tibetan myths a bit, but that’s about it. The story is set in modern times in a region I’m familiar with. The only thing I double-checked on a lot was what elements were in the original WONDERFUL WIZARD OF OZ versus the movie. The former is in public domain whereas the latter is not. I definitely don’t want to step on anyone’s intellectual property toes.

Chrys: Heh, I can imagine!  Tell us, if you weren’t a writer, what would you be?

J.A.: Well, I’ve tried my hand at several professions, but currently I’m working on my PhD in microbiology. I do love science, but I think I love writing more. Fortunately, for now at least, I’m able to do both.

Chrys: It’s really odd to me that you don’t write science fiction (or at least not planning on releasing any this year) although you have such sound foundations in science – but maybe it has to do with the escapism you mentioned (which I can understand very well…)

A different question: what person or person(s) has/have helped you the most in your career?

J.A.: My wife, Bethany. She has been encouraging when I needed it, but also critical when I needed it. She’s a freelance editor, so hasn’t been afraid to tell me when my stories needed work.

It is a bit awkward, though, when your wife reads through a manuscript and declares, “This ending is terrible!”

Chrys: Lol!Thanks for telling us so much about your writing and your stories, and good luck! One last thing: Where can people learn more about you and your writing?