Today I have a special treat for you: Canadian author Krista D. Ball, who studied history and is about to release a book on food and drink in fantasy writing (What Kings Ate and Wizards Drank, due out this year) took the time to talk a little about this fascinating topic. Here is what she says: 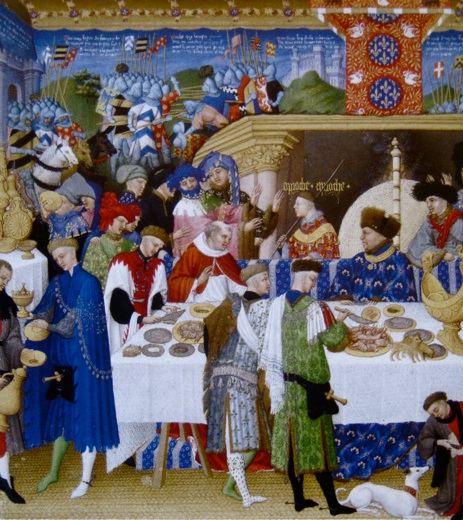 Detail from the Book of Hours “Les Tres Riches Heures” painted by the Limbourg brothers for Jean, Duc de Berry, in the early 15th century.

What’s your heroine snacking on?
By Krista D. Ball

I feel bad for characters in my stories. They are under huge amounts of stress, their lives are constantly at risk, and they have to make difficult choices that never turn out well no matter what they do. The least I could do for them is give them a decent last supper.

In contemporary urban settings, food doesn’t seem all that important. Cities are filled with restaurants of every flavour, so there’s not much opportunity to use food to develop the mood and setting of a scene.  That’s where science fiction and fantasy can really shine.

My novella, Spirits Rising, is set in the Canadian province of Newfoundland and Labrador. The island of Newfoundland only joined Canada in 1949, so there is still a strong sense of island identity. The island has been isolated from the world, sparsely populated, and for most of its history survived off the sea.

Since Spirits Rising takes place in a town of twenty people, I was able to use those traditional Newfoundland foods that might have been missed in an urban setting. My heroine eats Jig’s Dinner, a traditional Newfoundland meal of salt pickled beef, cabbage, potatoes, carrots, turnips, and pease pudding all boiled in the same pot. She chomps down on molasses cookies, a local favourite, and drinks Newfie Screech, a potent rum concoction.

In my science fiction novel, Road to Hell, I used food as a tool to show how bad things really were. The military officers belonging Perdition lived exclusively off field rations and packaged food, leaving what little fresh food was left after an attack for the civilian population living at the port station.

I love the concept of Star Trek’s food replicators, but I also believe they aren’t possible (or, at least not possible in my SF world). Instead, I developed a quasi-food vending machine for individuals in their rooms. A person could get banana bread and a coffee from their wall panel vending machine, freshly baked reconstituted soy protein. Yum.

I’d find it difficult to write in a typical setting with the standard meal fare being offered. I love to use food as part of the story. For me, it is its own minor character. 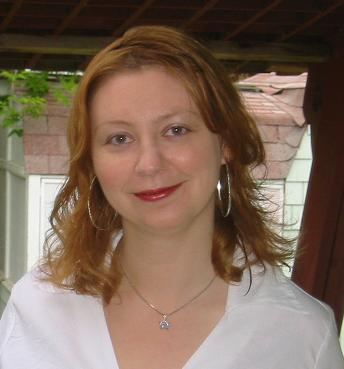