Sorry I haven’t been around, but I’ve been busy preparing the third book in the series of Elei’s Chronicles, entitled “Rex Equilibrium” which will be out after the first week of November. 🙂

Meanwhile, I’ve decided to publish a short story set in the world of Rex Rising, just to whet your appetite (but also to give you some background information on a character appearing in book 3).

Those of you who have read “Hera” (for free on amazon  AND Smashwords), I’m sure you remember her encounter with a boy called Mantis. Since Mantis will make an appearance in Book 3, I’ve decided to tell you the story of how he came to be who he is… And how he met another of our heroes long before the events in Rex Rising.

I have put “Mantis” for free on Smashwords, and hope to get Amazon to make it free too. But for now, here it is: 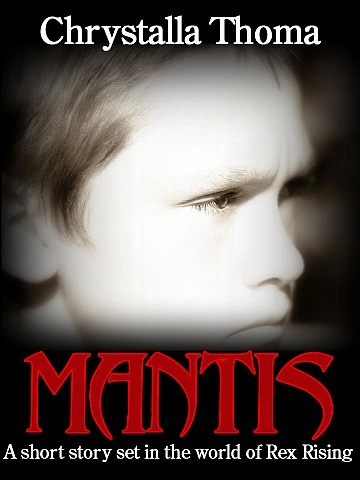 Before the events in Rex Rising, before Elei met Kalaes and Hera, another boy reached the island of Dakru, and this one was filled with rage. Because the regime took everything from him and he’d make them pay. This is the story of Mantis (whom you will meet in Rex Equilibrium, Book 3 of Elei’s Chronicles, coming out next month).

Grab a copy, and get ready for book 3. 🙂 Happy Reading!