The Next Big thing – The next novel

Hi everyone! I am participating in a blog fest called “The next big thing” where authors post about their next book! Many thanks to author Suzanne Tyrpak for tagging me on this. 🙂

So here are my answers to the questions – here’s what I have to say about my next book! 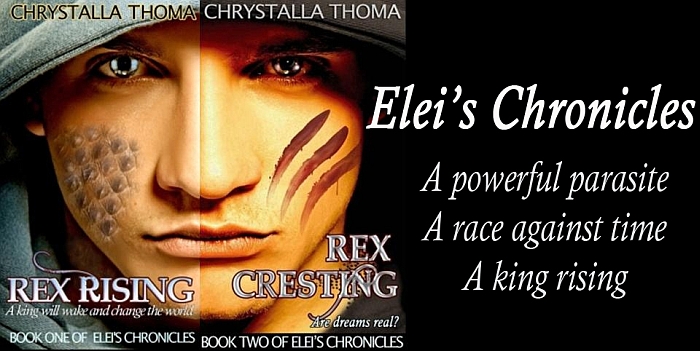 1) What is the working title of your next book?

The next book is called “Rex Aftermath” and it is book 4 in the series “Elei’s Chronicles” (following “Rex Rising”, “Rex Cresting”, and “Rex Equilibrium”.)

2) Where did the idea come from for the book?

I had this vision of a boy running for his life, not knowing why everyone was after him. Something like the Bourne Identity, I guess (although I didn’t know Ludlum’s work back then.) Add to that the parasites fighting each other, the post-apocalyptic world of the islands, and a situation where the protagonist doesn’t know if to trust his gut feeling or facts about the people surrounding him, and you’ve got the series Elei’s Chronicles, culminating in Rex Aftermath.

3) What genre does your book fall under?

It is dystopian science fiction for a mature (older) young adult public.

4) What actors would you choose to play the part of your characters in a movie rendition?

5) What is the one-sentence synopsis of your book?

There is war on the Seven Islands and Elei together with his friends will do all the can to bring peace.

6) Will your book be self-published or represented by an agency?

It will be self-published like the rest of the books in the series.

7) How long did it take you to write the first draft of the manuscript?

8) What other books would you compare this story to within your genre?

9) Who or what inspired you to write this book?

The idea for the series started when I read Parasite Rex by Carl Zimmer (http://www.amazon.com/Parasite-Rex-New-Epilogue-Dangerous/dp/074320011X). This is a non-fiction book about parasites and their strange behavior and abilities. It reads like a mixture of horror and science fiction but it’s all true! Terrifying and amazing. When I read it back in 2004 (I think!), I immediately thought, “what if I could apply such facts to humans?” (most of the parasites in the book have insects and marine creatures as their hosts). In fact, there was one parasite I found so fascinating, it gave birth to my all-women race (the Gultur race). It’s called Wollbachia. This tiny parasite changes its hosts (flies) so much that they cannot survive without it, nor can they reproduce. It is a very interesting creature and worth reading about. (http://serc.carleton.edu/microbelife/topics/wolbachia/index.html)

10) What else about the book might pique the reader’s interest?

This is a book about parasites that give the heroes power but also pain and problems, about people who will do everything to find love and a home, about an old war that still tears people’s lives apart.

Passing the torch to some fellow authors: